This is a brief post about the Gringotts Display I put up for the Harry Potter Birthday Party  (is a video link) for my son. We had taken so much time into making each display I wanted the kids to have to do something in all the spaces around the house. We decided instead of doing a pinata we were going to have Honeydukes Candy Store. In order for the “student” (guests) to shop there they would need money. And the Gringotts was the place to get it. Here is the with drawl slip I created for them to withdraw 5 gold Galleons to spend at Honeydukes. Though with almost 40 kids attending our party filling out this slip of paper became chaotic so we nixed the idea to save time and sanity. However, we would have used it if we had 1/2 the people so I thought I would share it.

The Gringotts sign was created by printing the circle logo of the Gringotts store as large as I could on a 8 1/2 x 11 sheet of cardstock, cut it out and pasted it on a $1 store plastic gold charger with Helmar 450 Quick Dry Glue. 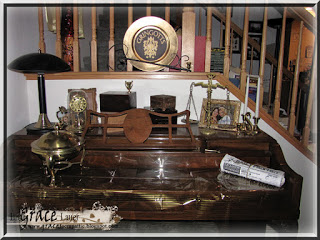 The scale was borrowed from a neighbor. My community and friends really helped out with this. Saved me money by allowing me to barrow some decorations. Thanks KIM! 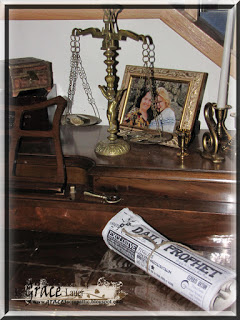 The clock was a $1 bargain at a garage sale… don’t know if it works
but that was a good price for something pretty to look at. Also the
“Coin Depository” was a garage sale find. I found Gold coins from a friend and at Oriental Trading Co. To thank Michele for letting me barrow her pirate treasure I gave her all the coins after the party was over. 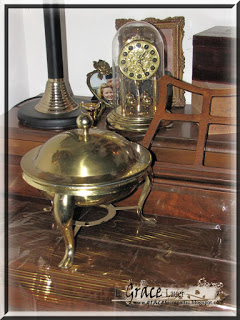 For more of the Harry Potter party please see the links below. Thanks for your time and please leave a comment below to tell me how you like our party.